Working in Organisation: Ole from the Housing Service 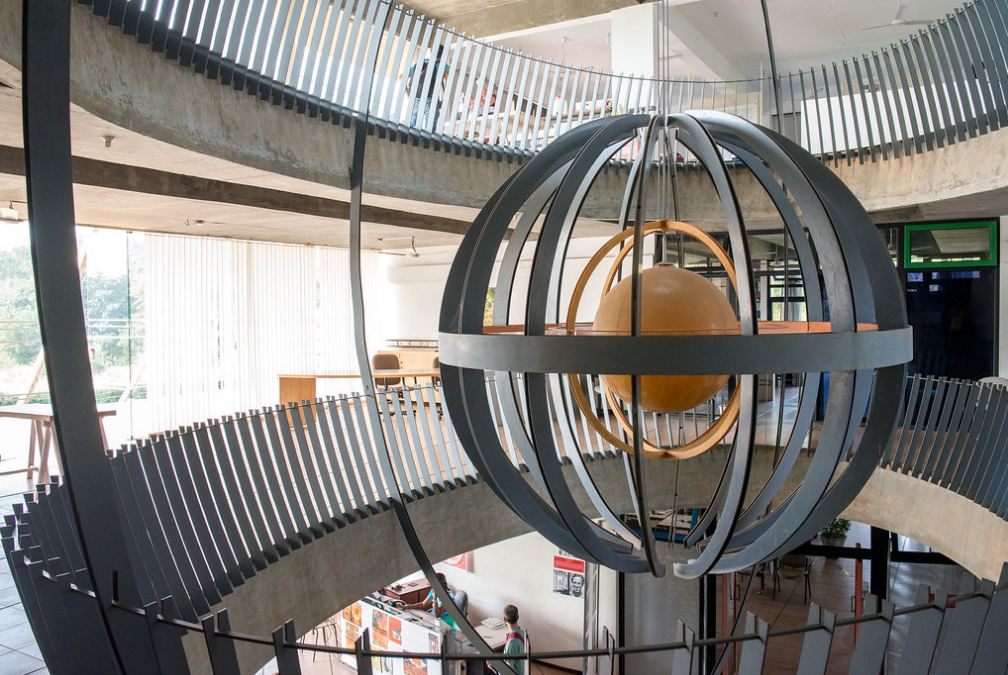 One of the features of Auroville’s internal organization is that, in theory, any member from the community can choose to be a part of its Working Groups. A Working Group is one of the bodies that handle different aspects of Auroville’s organisation: internal functioning, entry to Auroville, finances and housing, among others. We spoke to Ole, a second generation Aurovilian, who has been working in the Housing Service for the past 6 years.

Housing Service is one of the more complex groups in the community, as they try to fairly exchange housing opportunities and create new ones where possible. So how is the Housing Service different from a real estate agency anywhere else in the world? Ole explains to us how the principles of Auroville lead to a different kind of housing transaction.

“The housing service is in charge of all housing assets in Auroville. These assets are not owned by individuals – all the houses are owned by the Auroville Foundation. And people, even if they build the houses or pay for the houses, are merely stewards or caretakers of the house. And that stewardship only extends to Auroville. This means that if you leave Auroville, then you lose your stewardship of the house because effectively that’s your donation to Auroville. So in that sense, you can’t buy or sell houses but you can donate one to the community and sometimes someone else donates a house and you get to move into it.”

This has resulted in a few unique features of the housing system. House exchange for example, where you can exchange the house you are a steward of, with one of the same value somewhere else in Auroville. House-sitting is also very common in Auroville, as the name suggests, you get to live in and take care of somebody’s house while they are away on holiday or if they have left Auroville for a while.

Time to Step Up and Get Involved

Ole didn’t always want to work in Housing, in fact, he was one of the youths that left Auroville for a number of years. “I was born in 1979 and I was almost 19 when I left Auroville to go to London. I lived in London for 17 years, and then at one point, after a series of events, I decided to come back with my current partner, who also grew up in Auroville, and our 2 children. We came back to Auroville to live about 6 years ago.”

But very soon after he arrived in Auroville, he joined the Housing Board. “Since I came back, I’ve been working in Housing, which I thought was symbolic because I never wanted to work in ‘politics’ in Auroville. But I felt like all of us should try to get involved in the organisation of our community. It’s easy to criticise and see the things that other people have done wrong. And, of course, many mistakes have been made. It can feel like we as a community are not progressing or developing fast enough and it can feel like things are stagnant. I think this can be traced back to the issue of not having enough young people and people leaving. So I thought it was time for the second generation of Aurovilians, myself included, to step up a bit and get involved.”

Affordable Housing for the Youth

Why is the youth of Auroville constantly leaving? One of the reasons that Ole highlights is that it’s difficult for a youth with no life savings to settle down in Auroville.

“A few years ago, we realized that housing in Auroville had become too expensive, especially for younger people. Slowly this turned into the trend of Auroville becoming a kind of retirement community. Not because that’s the idea, but rather because only people of a certain age could afford to live here. Second generation Aurovilians and young people without funds have a hard time. For the majority of young people, buying a house is not really an option unless they leave Auroville for a while and make the money to come back and settle down. Over the last 40 years, most of the second generation Aurovilians have at some point gone out to work or study.”

With this in mind, work was being done to create affordable housing for the youth. “Since funding had already been approved for a youth housing project called Humanscapes, this became the first phase of what we now call the Youth Habitat Program. Around the same time, our team also managed to secure funding for fast-track modular housing on outlying land that was in danger of encroachment, which has turned into another youth community called Kriya. By now we have managed to create affordable housing for 130-140 young people, and we hope to eventually increase that to 500. So yeah, it feels like a big success in that way. It was very rewarding to see the happy faces of the youth that moved into their houses. That’s been a very nice process in the way of welcoming people. It’s great to see the effect it has on their lives and motivation in the community.”

Working in the Housing Service comes with its fair share of challenges. “The challenge is sometimes the bureaucracy in Auroville. I think we have more bureaucracy than in most other places. Not all of it makes sense somehow and matches up to each other. We have various groups that have policies and proposals that have to go through different groups before they can be approved. And it’s a kind of lengthy process. So we’ve had the situation many times that we either have building permission and no money or we have money but no permission. I think we could have gotten a lot further if those things would have been more aligned.”

Apart from bureaucracy there is of course the challenge of dealing with the ideal vs. the reality of Auroville. “Trying to deal with housing in a place where people don’t own their houses, but they pay a lot of money for their house, is very different and difficult. When people want to leave and then they realize they can’t get any money from Auroville, that’s a problem. I mean, for a long time, Newcomers were told they could get a refund for the first five years. Then suddenly somebody in the FAMC (Funds and Assets Management Committee) realised that this was not technically possible. By Indian law, you can’t refund donations. So now that’s been changed. But there’s lots of people who have been promised that they could get refunds, but we can’t technically do it. So its a challenge dealing with that.”

Ole feels for Auroville to be able to grow and move forward, the youth is the answer. As of now, there are not many youth members in the Working Groups, and the reason for that seems to be conflict between older Aurovilians and the youth.

“I feel that Auroville in a way is quite rigid, when it comes to planning, when it comes to the youth especially. In terms of noise, if you’re young and noisy, people complain and sometimes even threaten you with the police. The youth have been a bit marginalised and they then rebel against Auroville. So I think most young people, they kind of have an aversion to joining Working Groups. And my hope is that that will slowly change.”

“There is a community. I just feel we need to work more on our community spirit. And I feel, again, the youth is the hope for that. We need to encourage more participation of the second generation and get young people into the Working Groups. My experience has been that the way of working together is very different with young people on board. It’s much more dynamic. And the understanding of what Auroville is about is much more a given. Even without reading the texts or anything, I feel young people, especially the ones who grew up here, understand much better what they’re here for and what they’re trying to achieve in their life. And I feel it’s those people in the middle somewhere, which I guess is my generation, that have to try to make that bridge. And that’s why I’m still here.”

“Well, for me, it’s always been my home and it’s also my dream. This dream of Auroville has somehow always been my dream, to have a place where people live happily together. And I feel in the world there’s not enough of that.  Slowly, people are changing their mindset and now they are ready for something like Auroville. But I feel Auroville is not yet ready for those people [laughs]. We have a lot of work to do on ourselves and with our community to be a more welcoming place for that new mindset, and that’s what I hope will happen sooner or later.” 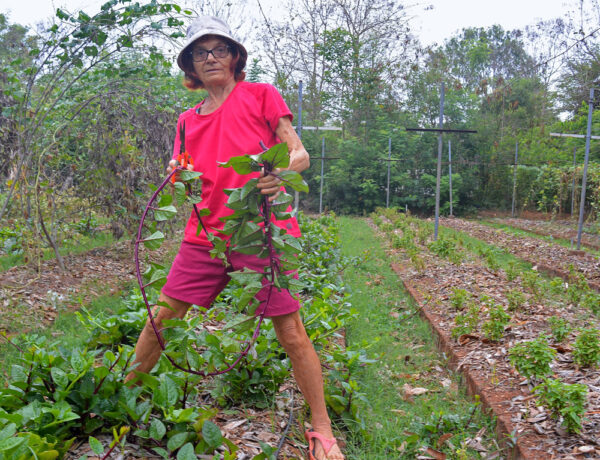 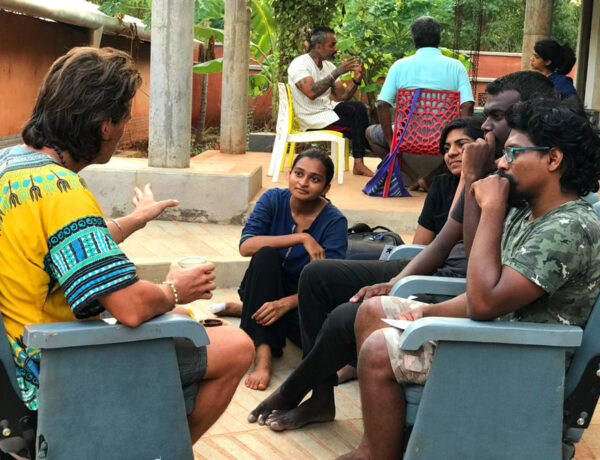 Don’t Judge a Book By Its Cover: the Human Library in Auroville 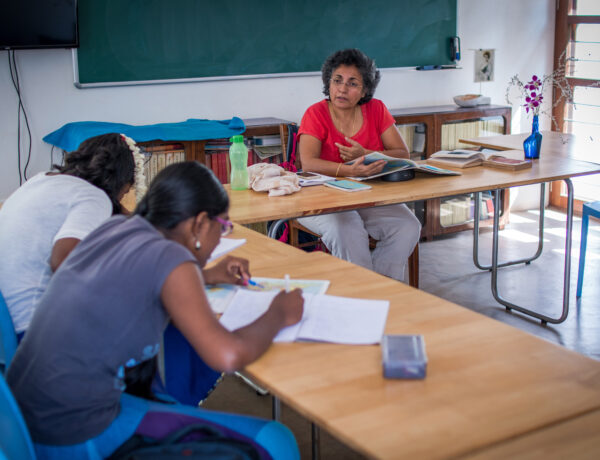