The Magic of Kolams 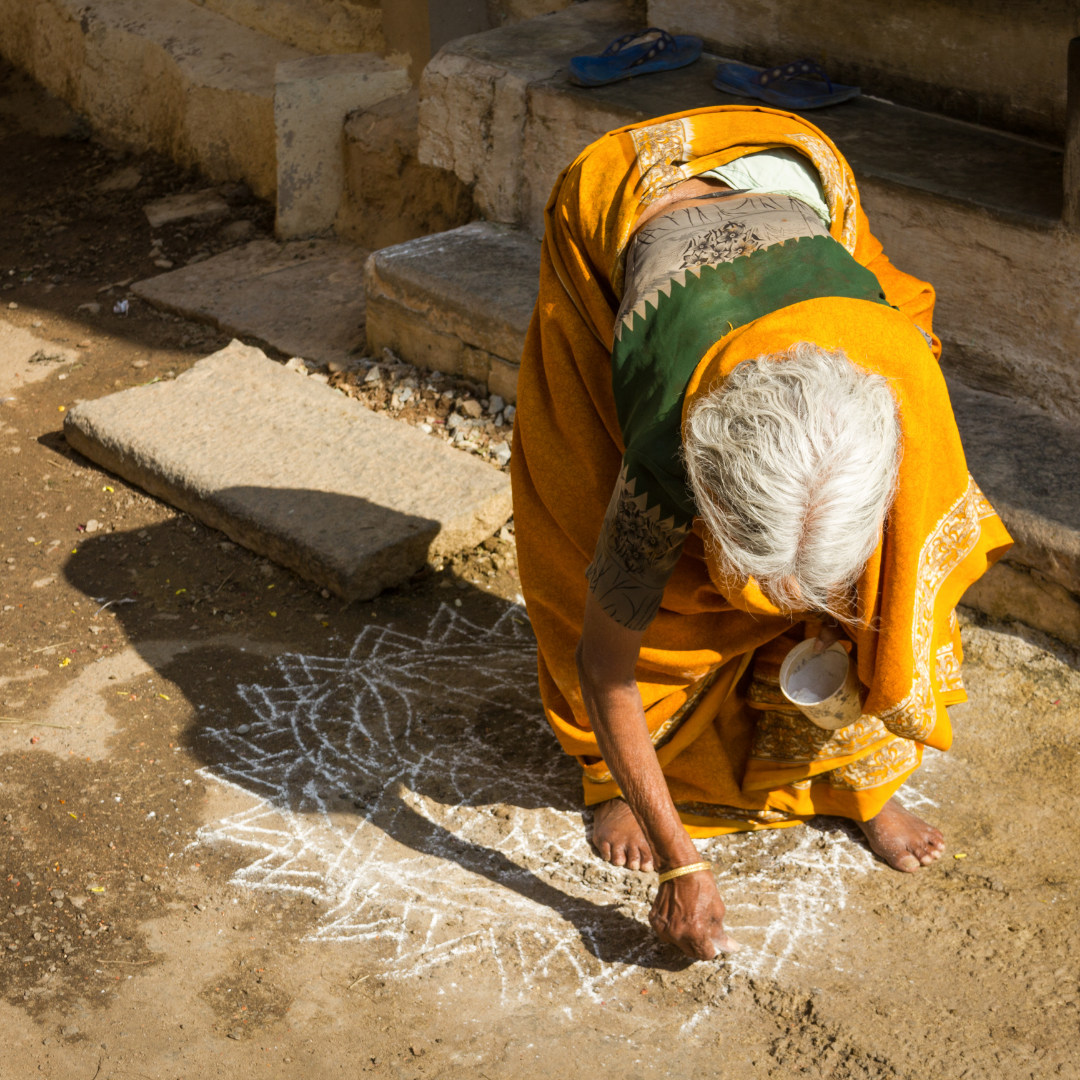 At the entrance of millions of homes, workplaces and temples across Tamil Nadu you will find precise geometric patterns drawn on the floor by Tamil women. In addition to being beautiful works of art, these designs, known as Kolams, are steeped in philosophical meaning, and are symbolic of the cycle of life.

Just before daybreak, these women wake up and begin the ritualistic process. It starts with the cleaning of the surface where the designs will be drawn, and sometimes involves lining the area with cow dung, which creates a uniform surface and is also considered to be cleansing in Hindu culture. Traditionally drawn using a dry rice flour mix known as Kolapodi, these days you will find people using chalk and other stone powders mixed with colours. There are no tools except the nimbleness of their hands. Using the thumb as the guide, these women are able to place the powder on the ground in swift motions, creating precise and perfect patterns just from memory.

Kolams are believed to be an invitation into the home, not just for guests but for the Hindu Goddess Lakshmi, who represents wealth and prosperity. Kolams are also said to ward off evil energies and spirits.

The symbolic nature of Kolam is that of rebirth and regeneration, representing the cycle of life. By the end of the day, the Kolam drawn in the morning would have either been blown away by the wind, eaten by the ants or stepped on by people. This ephemeral quality of Kolams means that everyday the women must start fresh and know that their Kolam is not meant to last, but the motivation to do this everyday without fail is a key component of the process.

Kolams are a deeply personal and meditative practice for Tamil women. We spoke to Grace Gitadelia, who has been practicing Kolams since she was a child, learning from her mother who started the first Auroville unit. “The biggest attraction to Kolams for me is that it’s like dance. It does last longer than the fleeting movements of motion, but it is also ephemeral like dance. It’s just for the day and it’s an offering for that moment, and you know you will start again the next day. I can see that it gives you a sense of connection to some universal forces, and it has mathematical properties and rhythm, like you will find in music and movement. For me Kolam is a language: The more I’m learning about Kolams, the more I am convinced that it is in fact a divine language.”

Kolam originates in South India, and in the North there is Rangoli, which has similar attributes, as it is also geometric patterns done on the threshold of the home. However, Kolam is more ancient. For Grace, Kolam is now a deep part of her life. “I’ve done Kolam all my life, and there is a sacred geometry in the Kolam. Kolam represents deep healing for me, I am able to connect my physical body to my emotional body and I have Kolam to thank for that.”

There are many different kinds of Kolams that serve different purposes. “A lot of the Kolams were all separated and segregated into groups by community. There are the Vaishnavi Brahmin Kolams, the Kshatriya Kolams, the farmer Kolams, the merchant Kolams, the fisherfolk Kolams. But now that people have access to Kolam booklets, many people are recreating all the different kinds of Kolams, even zentangling, the practice of drawing the same pattern again and again to create an image, is now entering the Kolam language. A lot of fusion, but this also means that the pureness of the Kolam is being diluted. So it is essential that we bring back the Kolam language, and the source of it spiritually and culturally.”

Aside from the differences in designs, Kolams can also be made in different areas of the home. “There are certain Kolams that you only make at the threshold of your home, and not in the hustle bustle of the street. And then there are Kolams that are to invite sacred forces, you put them in temples or the inner chambers of your home. Kolam has the function to create a safe haven, to ward off evil, to invite divinity into the home and act as a purifier.”

Grace has been teaching Kolam for many years now. She focuses on delving into the deeper meaning of Kolams and offers a holistic approach. She has shorter programs and also some which span a year for those who want to dive very deep into Kolam practice. She takes her students through the basic steps and much more. “It’s also a yoga, we talk about the history and also about how it sits culturally and spiritually. I don’t do too much of the copy/paste Kolam drawing, I give a lot of space for my students to discover their own personality in the Kolam. I also invite my students not to erase their Kolams if they make mistakes, but instead to see how they can incorporate it into the totality, and there’s always a beautiful harmony and balance that emerges.”

Here is Grace in action, making a “Kurma” Kolam. Kurma means tortoise in Sanskrit and is one of the Hindu God Vishnu’s 10 reincarnations.

Kolam is a tribute to the universal patterns that govern life. “99% Of all Kolams are dedicated to the sun, so Kolams are a huge body of sun worship, and light. I think the Kolam wants to be heard and understood, and is now unraveling its secret. This is also with other forms of non-verbal communication. All these signs, symbols, forms and shapes that indigenous people have been safeguarding for centuries are now coming to the front.”

Here is a step by step video of the Four Aspects of the Mother through Kolam if you would like to learn more! 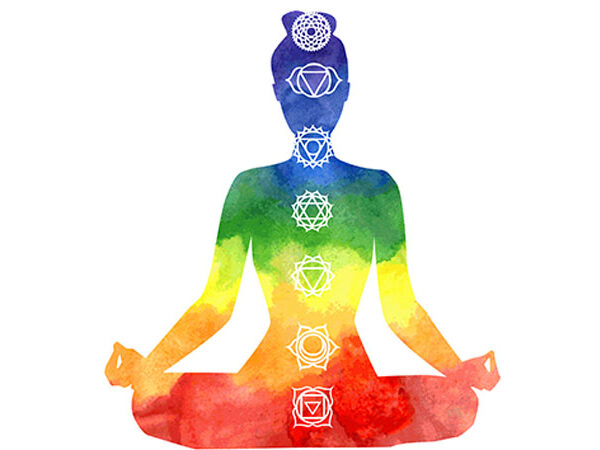 An Introduction to the Chakras in Integral Yoga 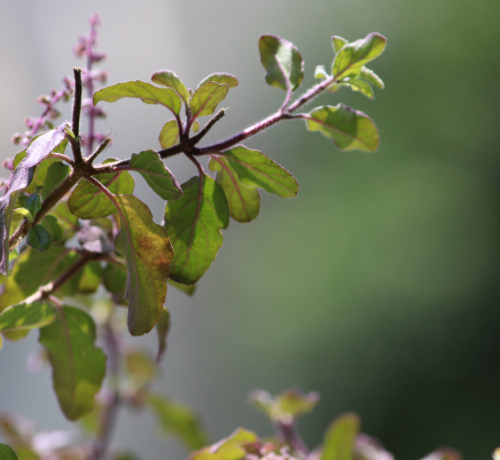 An Immune System Fit for the Pandemic with Ayurveda 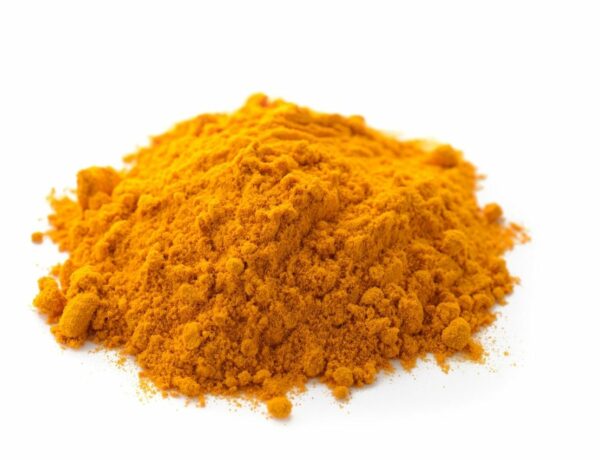 How to Use Turmeric Daily